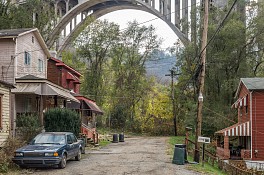 Andrew Borowiec, 30 Years in the Rustbelt

In an extended interview in Urbanautica, when asked about his influences, Borowiec replied: "Most of all, however, I've been influenced by the great French photographer Eugene Atget. Seeing the four exhibitions of his work that John Szarkowski organized at MOMA in the 1980s was a turning point for me. I think you can learn everything you need to know about photography just from looking at Atget. Taken as a whole, his pictures are like a great, epic Nineteenth Century novel--by turns beautiful, lyrical, informative, philosophical, comical, visually surprising, and always informed by Atget's intelligence and understanding of his subject's meaning in its full breadth and complexity."