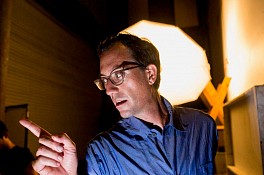 Born in New York City in 1974 and attended Oberlin College where he majored in comparative religion. In 2003 he was selected to be in PDNs 30 under 30 issue and also published his first monograph, titled The Company of Strangers (J&L Books). His work has been exhibited internationally including a solo show at The Museum of The City of New York; and group exhibitions at The Art Institute of Chicago, Museum of Fine Arts Houston and FOAM, NL. His photographs have been published in Aperture, Harpers, Vogue, Wired, Fortune, W, and The New Yorker magazine.  He is a member of the collective of street photographers In-Public and faculty at the MFA Photography, Video and Related Media Department at the School of Visual Arts, NY. He is included in the books Bystander: A World History of Street Photography and Street Photography Now. Powell’s second monograph, titled The Lonely Ones (J&L Books) was celebrated as one of the best photography books of the year. Powell is currently at work on a book tilted Family Car Trouble and his ongoing street work series titled Mise en Scène.

The Art Institute of Chicago.

The Museum of Fine Arts Houston.

The Museum of the City of New York.

The Lonely Ones, monograph by Gus Powell, Lazy Dog/Mutty, 2017.

Aperture No. 217, Portfolio: The Lonely Ones, intro by Heidi Julavits, Winter 2014

The Company of Strangers, monograph by Gus Powell, J&L Books, 2003.

Bystander: A History of Street Photography, by Westerbeck/Meyerowitz, Bulfinch 2001.

Marmalade (UK), “Finding Beauty in The Company of Strangers” by Myles Quinn, 2003.