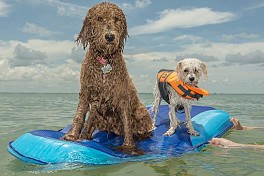 GRAM’s exhibition Tony Mendoza: Cats and Dogs, presents photographs by this Ohio-based photographer and writer of Cuban descent. Among the eighteen-works included are black and white images from his 1985 project, Ernie: A Photographer’s Memoir, which features a photogenic feline Mendoza encountered upon moving to a new apartment, as well as color images from the series Dog Beach, and Bob, named for a dachshund who became something of a canine “muse” to the photographer. Mendoza’s images combine an animal-lovers’ focus on a subjects’ behavior and personality with a photographer’s attention to composition, light, and movement.