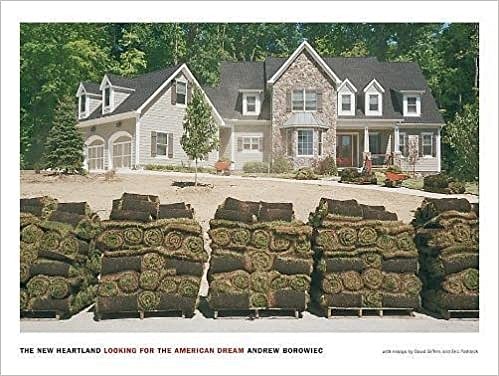 During the past thirty years, there has emerged throughout America a new kind of urban vision that blends residential/suburban development with large-scale commercial centers. Rolling farmland and country estates that used to surround towns and cities have given way to vast housing developments that feature nearly identical, hastily built mini-mansions with enormous garages and fancy yards. These are the new bedroom communities for middle-class Americans who commute to urban America where the jobs are.

For the first time, these residential enclaves are linked to big-box shopping complexes where traditional Main Streets of yore have been eclipsed by malls known as “lifestyle centers” filled with national chains whose commercial architecture is a blend of multiple historic periods and styles that create a fanciful display but have no relation to regional traditions. Behind this imagined past era of luxurious consumerism is a ubiquitous culture based on global marketing in which homogenization and conformity have won over the American dream and created a new kind of American heartland.

Andrew Borowiec is the first photographer to provide a comprehensive vision of this new American landscape. He directs our attention toward how such development has evolved in his home state of Ohio, a longstanding bellwether for American tastes and values whose citizens have voted for every winning candidate in a presidential election but one since 1944. It's also the place where fast-food companies test-market new products and the place where chewing gum, Teflon, and the first airplane, cash register, gas-powered automobile, traffic signal, and vacuum cleaner were invented. Even the state's Division of Travel and Tourism has long relied on “Ohio, the Heart of It All” as its popular motto to attract visitors to the state.

Andrew Borowiec's work follows in the tradition of other legendary photographers who so keenly interpreted land and life in America—among them Walker Evans, Robert Frank, Robert Adams, Frank Gohlke, and other New Topographics photographers. He has used his keen eye and extensive fieldwork to give us a fresh, humorous, and razor-sharp view of what is happening in America today. There is a new heartland, representing a new American dream, and it can be found in the new residential and commercial landscapes of Ohio and the rest of America, if we choose to open our eyes and take a look.