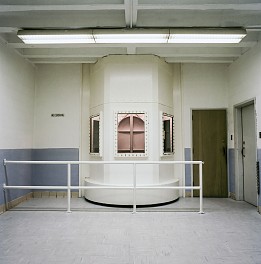 Lucinda Devlin's current exhibition at the Eastman Museum, Rochester, is on view until 31 December 2017.  Read a review by Rebecca Rafferty at the Rochester City Newspaper here.

Selections from three series by photographer Lucinda Devlin are featured in this exhibition at the George Eastman Museum, Rochester, New York: Pleasure Ground (1977-90), Corporal Arenas (1982-98). and The Omega Suites ((1991-97). Best known for The Omega Suites--precisely composed images of execution chambers in the United States--Devlin has devoted her career to exploring the relationship between our bodies and the spaces that they inhabit. She has concentrated in particular on interiors associated with pleasure or pain, creating photographs that draw attention to the power relationships embedded in a room's architecture and decor. At the same time, her photographs function as poignant meditations on the familiar yet extraordinary spaces in which our bodies pass time.  The exhibition will be on view from June 24-December 31, 2017.

In conversation with Curator-in-Charge at the George Eastman Museum, Lisa Hostetler, Devlin will discuss her work on view in Sightlines, Friday, June 23 @ 6pm, Dryden Theatre.

On May 30th Ivorypress (Madrid) will present Lifeline, the first solo exhibition in Spain of photographer Mariana Cook, which will also be included in PHotoEspana's Festival Off. The exhibition features forty photographs selected from hundreds of images that Cook made between 1999 and 2015 as part of her "Close at Hand" series, for which she made one photograph every day of objects, forms and light abstractions that moved her. In conjunction with this exhibition, Ivorypress has published Lifeline, a volume containing all the works presented in the exhibition, with an introduction by the world-renowned poet Jorie Graham.  The exhibition will be open to the public until 15 July 2017.

Fifteen portraits by Mariana Cook will be featured at Wolfson College, Oxford University, England. Cook's Wolfson portraits include past and current college presidents Isaiah Berlin and Hermione Lee, the scientist Marcus Lu Sautoy, the pianist Alfred Brendel, the classicist Mary Beard, and the former President of Ireland, Mary Robinson, among others. The exhibition will be on view May 27 through December 31, 2017.

Andrew Borowiec, 30 Years in the Rustbelt

In an extended interview in Urbanautica, when asked about his influences, Borowiec replied: "Most of all, however, I've been influenced by the great French photographer Eugene Atget. Seeing the four exhibitions of his work that John Szarkowski organized at MOMA in the 1980s was a turning point for me. I think you can learn everything you need to know about photography just from looking at Atget. Taken as a whole, his pictures are like a great, epic Nineteenth Century novel--by turns beautiful, lyrical, informative, philosophical, comical, visually surprising, and always informed by Atget's intelligence and understanding of his subject's meaning in its full breadth and complexity."

The Photography Show Presented by AIPAD

With an expanded program of exhibitions and events, The Photography Show will be held March 30 – April 2, 2017, in its new location at Pier 94. More than 115 galleries from around the world will offer contemporary, modern, and 19th century photographs as well as photo-based art, video, and new media. Presented by AIPAD (the Association of International Photography Art Dealers), the 37th edition of the Show will commence with a Vernissage on  Wednesday, March 29. One of the world’s most highly-anticipated annual art fairs, the Show is the longest-running and foremost exhibition dedicated to the photographic medium. 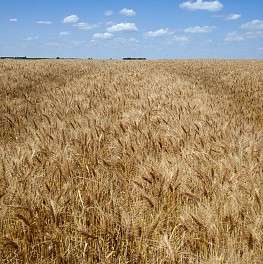 Lucinda Devlin's photographs, in her retrospective exhibition at the Weatherspoon Art Musem, Greensboro, NC, serve as social commentaries on timely and socially relevant issues such as personal rights, the death penalty, and agribusiness. An internationally recognized American photographer who now lives in Greensboro, Devlin began her career in the 1970s during the genesis of color photography in America. At the time, she took up not only color photography, but also the artistic approach that she continues to this day, one that emphasizes an objective or neutral point of view. Devlin also discovered her preferred subject matter: psychologically charged spaces absent of any human figures yet nonetheless signaling contemporary public and private life. Her earliest series, Pleasure Ground, featured droll images of thematic hotel rooms. Subsequent series (Habitats, Subterranea, Corporal Arenas, Field Culture, and Lake Pictures) have continued to probe the meaning of place at such sites as zoos and amusement parks, tanning salons and health spas, hospitals and funeral homes, agricultural facilities and open fields, and lastly, Lake Huron's shoreline. Her most provocative and best known series, The Omega Suites (so named after the final letter of the Greek alphabet), proffered emotive images of sterile execution chambers and the apparatuses associated with them.

New works by Mike Smith, photography professor in the Department of Art & Design at Eastern Tennessee State University. Retiring this year, 2017, Mike has been teaching and mentoring students since 1981. Parting Shots is on view January 3-March 20, 2017 at the Reece Museum, ETSU. A reception will be held on Thursday, January 26 from 5 to 7 p.m.